A Message to Moms after Divorce: Help Your Daughter Avoid ‘Daddy Hunger’ – Part I 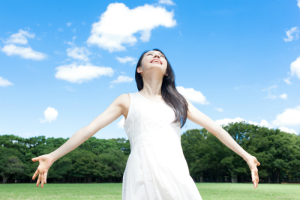 As a child, I was never quite sure about the nature of my father’s feelings toward me. When I was very young, I knew that I was Daddy’s Little Girl because we used to make special trips to the seashore where we would collect guppies — putting them into buckets under the moonlight to watch them glisten and jump. But for several years after my parents’ split, I rarely saw my father so I developed a deep craving for his attention or what I call “Daddy Hunger.” I later realized that every daughter yearns to have her dad’s approval and that I wasn’t to blame for his absence in my life.

After my parents’ divorce, my father’s absence felt like abandonment and my self-image suffered. At age seven or eight, I became the “teacher’s pet,” a serious student who was cheerful on the outside but shamed on the inside. In The Wounded Woman Healing The Father-Daughter Relationship, Linda Schierse Leonard, says that for many girls and women, the root of their injury stems from a damaged relationship with their father. “If the father is not there for the daughter in a committed way while she is growing up,” Leonard writes, “She may lose confidence in herself, and a wound may occur.”

A legacy of loss had been passed down to me from my mother but I wasn’t aware of it until I reached adulthood. In my female-headed family, we were so good at adapting and glossing over things that my sisters and I rarely spoke about the absence of our father. It wasn’t until I had my daughter, that I realized my own mother’s role of being a gatekeeper and limiting my contact with my dad caused me to be uneasy with men and to develop “Daddy Hunger.” Sadly, this wound impacted all aspects of my life including choice of partners, trust issues, and low self-esteem.

In a divorced family, there are many ways a father-daughter relationship may suffer. Based on her research, Dr. Linda Nielsen found that only 10 to 15 percent of fathers get to enjoy the benefits of shared parenting. She also discovered that divorce often damages a daughter’s relationship with her father more than a son’s. This can be explained by the fact that boys tend to spend more time with their father after a family dissolves. Nielsen posits that while most daughters of divorce are well-adjusted several years after their parents’ divorce, many have damaged relationships with their fathers. Unfortunately, if the damage is severe, a girl can grow into adulthood with low self-esteem and troubled relationships with men.

What’s in the best interest of children after divorce? Dr. Joan Kelly, a renowned psychologist and parenting researcher confirms that the outcomes for children of divorce improve when they have equal access to both parents. These include better psychological and behavioral adjustment, and enhanced academic performance. Clearly, the literature demonstrates numerous benefits to children when their living arrangements enable supportive and loving fathers to be actively involved in their lives on a regular basis, including overnights.

I believe that the vast majority of mothers want their children to maintain a close bond with their fathers post-divorce but may struggle with how to help them navigate this relationship.