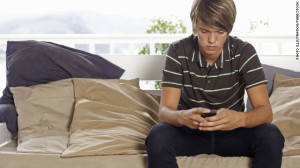 The conversation began abruptly, with the anonymous teenager getting straight to the point: She had just told her family that she was really a boy trapped in a female body. “Now my family hates me,” she told a crisis counselor.

The counselor was empathetic. She asked for more detail about the family, offered encouragement and provided the name of a local support group.

It was in many ways a typical exchange on a crisis hotline, except it took place entirely by texting.

While counseling by phone remains far more prevalent, texting has become such a fundamental way to communicate, particularly among people under 20, that crisis groups have begun to adopt it as an alternative way of providing emergency services and counseling.

Texting provides privacy that can be crucial if a person feels threatened by someone near them, counselors say. It also looks more natural if the teenager is in public. “They can still look ‘cool’ to their peers or friends while receiving assistance that they are in desperate need of,” said Jerry Weichman, a clinical psychologist in Newport Beach, Calif., who deals with adolescent issues.

For counselors, texting allows them to deal with more than one person at a time and to introduce experts into a conversation without transferring or placing a caller on hold. Exchanges by text, they point out, can also resume more seamlessly after an interruption, because a written record of previous conversations already exists.

The adoption of texting extends beyond just crisis groups. By May, the four largest phone companies had promised to make it technologically possibleto text 911 anywhere in the country, for local response services that want that option. Already some locations within cities like Los Angeles and Greenville, S.C., are offering the service with at least one telephone carrier.

It is also possible to reach broader organizations like the National Dating Abuse Helpline and National Human Trafficking Resource Center by text.

Text counseling remains a nascent field and groups experimenting with it have had mixed results. But the benefits, especially with adolescent issues, have made it an attractive option for hotlines dealing with specific social and emotional issues likes suicide, depression and sexual abuse.

Crisis Text Line, a nonprofit based in New York that handled the text from the girl who felt she was a boy trapped in a girl’s body, started offering text counseling in August, delivering services through partnerships with six separate hotlines across the country. Since then, the group says, it has exchanged nearly one million texts with 19,000 teenagers, even though it has promoted itself in only two cities — Chicago and El Paso. (The group has also gotten some free advertising help from Google. For instance, if someone searches “How Do I Commit Suicide” in those markets, an ad with the Crisis Text Line’s information appears prominently.)

Mr. Weichman, the psychologist, said that with texting teenagers could “keep their conversations and can review them at a later date when they are struggling with another situation in their life.” Nancy Lublin, the founder of the Crisis Text Line, said her group had received messages from distressed teenagers who were in the same room with their abusers, who might not have reached out by phone.

Often, Ms. Lublin said, Crisis Text Line’s job is to help the texter find support close to home. That was the case recently when a woman wrote to say that she thought she was raped the night before. Crisis Text Line helped put her together with her mother. (The New York Times was allowed to view texting exchanges, but because of Crisis Text Line’s obligation to protect the privacy of its clients, they were stripped of any identifying information).

Crisis Text Line’s data, she said, suggests that children with eating disorders seek help more often Sunday through Tuesday, that self-cutters do not wait until after school to hurt themselves, and that depression is reported three times as much in El Paso as in Chicago.

This spring, Crisis Text Line intends to make the aggregate data available to the public. “My dream,” Ms. Lublin said, “is that public health officials will use this data and tailor public policy solutions around it.”

The idea for Crisis Text Line began two years ago when the main nonprofit organization run by Ms. Lublin, DoSomething.org, which encourages teenagers to get involved in causes like animal cruelty, received an unsolicited and chilling text.

“He won’t stop raping me. It is my dad. He told me not to tell anyone. Are U there?”

Although DoSomething regularly communicates with its members by text, it had no crisis capabilities. Legally, DoSomething was allowed to text back a hotline phone number, but no more. It never heard back.

After spending weeks sleepless with worry, Ms. Lublin decided that if teenagers were in a threatening situation and wanted to text with a counselor instead of talk, there should be a way. She started fund-raising and hired a team of programmers who toured hotline centers asking them how text might be used to address the deficiencies in the current system.

People texting for help receive the same services as those calling in, including risk assessment, emotional validation and collaborative problem solving. But the interaction plays out much differently, crisis experts say.

Texters tend to be more immediately in crisis than callers, the crisis experts say. Phones attract the lonely and pranksters the way text does not.

Ron White, chief program officer for Samaritans Inc., a suicide prevention organization in Boston that is part of the Crisis Text Line network, started using its texting service last August. He says that texting conversations will have more pauses and play out over a longer time, but for some reason tend to be much more direct.

“On the phone there is sometime building a rapport,” he said, “but young people on text tend to get right to the point. They go to zero to 60 in a couple of seconds. The second or third message might be, ‘I am sitting here with pills and thinking about killing myself.’ ”

Beata Momtaz, who has worked both the phone and text hotlines for Samaritan, says that she prefers texting because she thinks it is the way teenagers most like to communicate. Still, she said, there are challenges.

“On the phone you have the ability to moderate what you are saying with your tone,” she said. “With text for me when I started doing it, I had to think about my words and how to say something a little more softly.

Also, she said, resolution can be more confusing. “With text they can disappear a lot more easily than the phone,” Ms. Momtaz said. “People rarely end a phone call by randomly hanging up.”

That said, with texting, a conversation is never really over, she said. The minute the texter writes back, whether it is an hour later or a week later, the system will automatically pull up the previous messages for the counselor on duty and they can begin again.